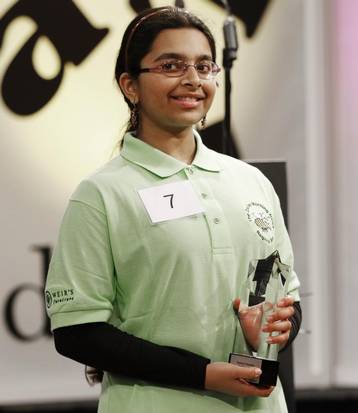 Smrithi Upadhyayula stood up straight even though she was taller than the small mike beside her. She was alone on stage and she paused, but didn’t look nervous, before correctly spelling out the winning word: “otitis.”

The 12-year-old won the 57th annual Dallas Morning News Regional Spelling Bee on Saturday, and will go on to Washington, D.C., to represent the North and East Texas region at the Scripps National Spelling Bee in May. This was Smrithi’s third year to compete; she placed third in the regional bee when she was 10 years old.

Smrithi was one of 24 top spellers from 23 counties. Dallas County had two contestants, one representing private schools and the other — Smrithri — public schools. The students beat out about 10,000 competitors in fourth through eighth grades at 600 schools to get on stage Saturday.